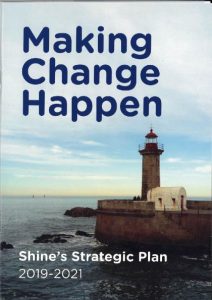 This strategic plan builds on our previous plans which have led the organisation in its achievements to date. Since late 2017, we have engaged in a number of focused activities to inform us on the development of this new strategic plan. These activities include a review of our current support group activities, a series of stakeholder meetings involving staff, facilitators, Shine members and board member workshops.

We are committed to continuing to support and enable all those affected by mental ill health and their families to make as full a recovery as possible, to be able to avail of timely and appropriate services in line with best practice and be treated as equal citizens.

Over the coming years we aim to consolidate and improve the national reach of our work. We will research new areas of work to identify best practice in recovery-orientated service delivery for all family members. We will continue to advocate for more family friendly mental health services in line with national policy. We will provide accurate and timely information and continue to raise awareness in all sectors of Irish society. Our activities will be rooted in our values, vision, mission and strategic plan.

Shine’s Relatives Support Groups are for families, carers and friends of people with mental ill health. In challenging times, it can be helpful and reassuring to talk to other people with similar experiences. Learning from other people’s ways of coping is an important function of our relatives groups, as well as growing your own support network and a chance to learn and build community supports. 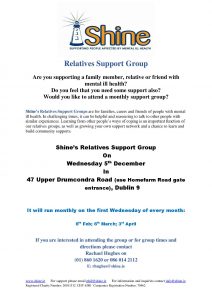 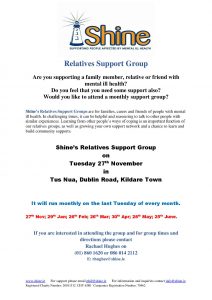 11.00- 12.30pm       Voices in my Head (Showing of RTE Documentary on People in Recovery) This will be followed by a panel discussion with Nicola Wall, participant of the documentary and Anne Sheridan, Hearing Voices facilitator and Q and A’s from audience. 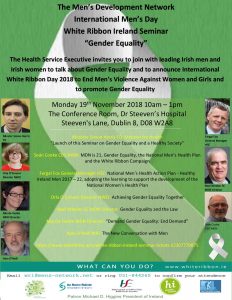 The Men’s Development Network CLG and its White Ribbon Campaign address Gender Equality in Society, Health, Law, Advocacy and in men’s conversation, hosted by the HSE.

10 am: Seán Cooke CEO MDN welcome and outlining this IMD event, MDN and HSE/HI/HI-M/NMHP/Engage/WRI, MDN and its 21years.

10:45 Noel Whelan Senior Council: Positive changes in the Law in relation to Gender Equality in Ireland including on Violence Against Women and Men, particularly the SOA and the new DV Law.

12:30 Alan O’Neill: Gender Equality, a key ingredient in the New Conversation with Men.

A Lust for Life present:

Where There’s a Will: A new podcast tackling Ireland’s mental health system

Ireland’s mental health system is failing us – something needs to change, and soon.

A Lust for Life has brought together some of the best and brightest minds in Ireland’s mental health sector to ask: why is our mental health system so dysfunctional? Who is responsible for fixing it? And what can we, collectively, do to create long-term, systemic change?

Award winning mental health charity A Lust for Life, co-founded in 2015 by Niall Breslin (Bressie), has today launched this new six-part podcast series, Where There’s A Will, about our mental health system, which attempts to answer these questions and more.

The podcast tackles the problems in the mental health system, covering stories of individuals failing to receive they help need and systemic challenges with policy and infrastructure from those on the coal face. Guests include Brian Higgins (CEO of Pieta House), Professor John Hillery (President of the Royal College of Psychiatrists), Niall Muldoon (Ombudsman for Children), Senator Joan Freeman, Professor Peter Kinderman (University of Liverpool), Dominic Layden (CEO of Aware), Dr Ciara Kelly (Broadcast Journalist), John Saunders (CEO of Shine, Supporting People Affected by Mental Ill Health and Chair of the Mental Health Commission), Dr Eddie Murphy (Clinical Psychologist), Martin Rogan (CEO of Mental Health Ireland), and more; as well as eight people who share their personal experience of using the mental health services, stigma, barriers to care, and what ‘good’ could and should look like.

“We made this podcast series because we at A Lust for Life fundamentally believe that the solutions are out there, that collectively we can influence our political leaders to drive towards a mental health system that truly serves our beautiful island. It is a privilege to bring together so many smart, articulate and informed people to share their perspectives on mental health in Ireland. This podcast provides a ‘state of the nation’ on the mental health system as it is today – and, more importantly, provides a roadmap for a better future”, says Chairperson and Acting CEO, Paula McLoughlin.

“Through this podcast series we’ve connected a number of key people working in mental health to deconstruct the problems we face today – in 2018 – and what we need to focus on.to make things better. We learned a huge amount in making this series, and we hope people listening will learn a lot too. Importantly this work is not just about going over the old ground of everything that’s wrong with the system – it is about articulating the change that is both necessary and possible.” says Editor and podcast producer Ciara O’ Connor Walsh.

“At Revive Active we promote health, exercise and wellbeing therefore our partnership with Lust for Life is a natural one. Mental health is very prevalent in today’s society and if we as a company help one person by supporting the production of this podcast it will have been a success.”

The series will culminate in a live podcast episode recorded as part of the First Fortnight Festival in January, and will form part of a longer term advocacy campaign that A Lust for Life are driving around political accountability in mental health.

You can hear the trailer here.

You can also listen to previews of the first three episodes below.

For more information or to set up an interview, contact producer of Where There’s A Will,  and Editor of A Lust for Life, Ciara O’Connor Walsh at editor@alustforlife.com or on 0851076017.

About A Lust for Life

Co-founded by Niall ‘Bressie’ Breslin in October 2015, A Lust for Life is an award winning Irish wellbeing movement created to transform how we talk about and treat mental health. Check us out on www.alustforlife.com. A Lust for Life is a registered charity. Registered Charity Number is 20157913.

Founded by Dáithi O’Connor in 2011, Revive Active passionately believes in doing things right.  From humble beginnings, Daithi backed his vision with everything he had and built a successful business with strong foundations. The team has grown and now includes doctors, scientists, production specialists and expert nutritionists, all dedicated to making innovative health food supplements that really work. 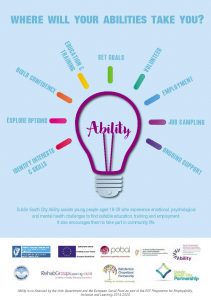 The Ability Programme is a free voluntary service for young people aged 18 – 29 offering support and guidance to develop positive pathways to work and study.

The type of support offered is person centred career planning and pathway support on a one to one and /or group basis. For example, exploring personal interests, building confidence and communication skills, writing CV’s, interview preparation, finding volunteer or work shadowing opportunities and support to access local training and education.

Ability staff will also work with local employers, employment services, education and training providers to support the progression of young people in their work and study. 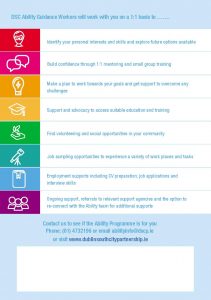 The Trinity Department of Psychiatry invites you to a Public Lecture:

“Do talking therapies make a difference for individuals with Psychosis?”

This is part of Dr Alison Brabban’s Visiting Professorship to Trinity College, Dublin

Alison qualified as a Clinical Psychologist in 1990 and since then has specialised in Cognitive Behavioural Therapy for Psychosis and has been involved in teaching this internationally.  She is passionate about broadening the availability of psychological treatments for individuals affected by psychosis.

She was given a Visiting Lectureship at Harvard University Medical School in 2006 and was awarded a Beck Scholarship from the Beck Institute for Cognitive Therapy in Philadelphia. She has been appointed as the National Advisor for Psychosis and Bipolar Disorder for the Improving Access to Psychological Therapies programme within NHS England. Alison also works as the Clinical Lead for Recovery for a NHS Trust in the North East of England and as a clinician in the local Early Intervention in Psychosis service. Alison was part of the UK’s Schizophrenia Commission and was also involved in the development of the recent update of the NICE guideline for schizophrenia and psychosis.

This event is provided without charge with no requirement to book a place.

In Two Minds is a new piece of ambitious and affecting theatre currently being developed by Joanne which looks at the realities of living with bipolar disorder and its effects on relationships. It is inspired and informed by Joanne’s lived experience of her own mother’s bipolar disorder and her mother is a collaborator on the project.

In Two Minds was originally commissioned by Belltable: Connect and is now being developed with the support of The Arts Council, The JP Mc Manus Benevolent Fund, Limerick City and County Council, The Community Foundation of Ireland and Fishamble’s New Play Clinic. A work in progress performance will take place in Smock Alley Theatre in Dublin on January 12th 2019 as part of First Fortnight, Ireland’s mental health arts festival.

The focus groups will be a relaxed, informal opportunity to confidentially share and discuss your experiences of the condition with others who can relate. Joanne hopes it will also be an opportunity to inform the creative process as she heads into the next phase of development on the show. All contributions will be totally confidential.

These sessions are not intended to be a form of therapy. Participants will be provided with information about a range of relevant free and low cost services and supports that are currently available to those affected by bipolar disorder in the Limerick area.

Joanne will also be presenting some findings of her research at the annual winter conference of The National College of Psychiatrists and hopes that this will prove to be a valuable way to connect healthcare professionals with the realities of the lived experience of bipolar disorder for individuals and families in Ireland.

If you, or someone you know, would like to take part in one of these focus groups or if you have any questions, please get in touch with Joanne on info@joanneryan.ie.

If you cannot attend one of these groups but would like to be part of any future focus groups please also get in touch!

The next sessions are generously hosted by GROW at their Limerick centre at 33 Henry Street, on the following dates:

Session for anyone who has a close family member who identifies with symptoms or a diagnosis of bipolar disorder:
Tuesday 6th November 6pm-8pm

Sessions for anyone who identifies with symptoms or a diagnosis of bipolar disorder themselves: 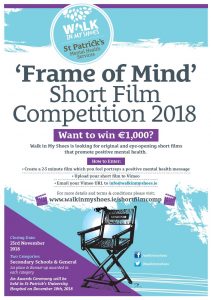 To enter all you have you do is create a 2-3 minute long video that tells a story that you feel portrays a positive mental health message.

The shortlisted entries from both categories will be shown at a special screening in St Patrick’s University Hospital on December 10th 2018 at 6pm and the winners will be selected by our esteemed judges.

The closing date for entries is 5pm on Friday November 23rd 2018.